AnnouncementsAudio/VideoOur Work in the News

While church and state are separate in the United States, Oregon’s government may be more interested in the welfare of churches than victims.

(SALEM, Ore.) – Oregon sex abuse survivors joined Portland Attorney Kelly Clark at the capitol in Salem today, to attend a hearing for a bill that would extend the window of time sex abuse survivors have to take action against the person or people who abused them.

Clark is known for taking sex abuse suspects to task and rallying endlessly for victims.

At this time, the cut off age for sex abuse victims to come forward, is 24.

Many of the cases originate from churches in Oregon and experts say it often takes several decades for a person to comprehend the magnitude of their experience and come forward.

The Portland Archdiocese of the Catholic Church in Oregon, much like in other locations including Boston, have worked hard to avoid responsibility and liability for pedophiles who currently or formerly exist as elevated members of the various churches.

Victims and their advocates, including the group SNAP, (Survivors Network of people Abused by Priests) along with Private Investigator Dawn Krantz-Watts of All Things Legal Investigations in Portland, say they are unhappy with the way the bill is progressing and they believe it may fail due to the relationships that exist between the Oregon Senate and various church groups.

In denying, delaying or killing this legislation, Oregon becomes extremely hypocritical as a government that strongly condemns the sexual abuse and exploitation of children, while struggling with basic common sense answers for the people lucky enough to survive the abuse in the first place.

I interviewed Clark and Krantz-Watts and three people who are survivors today after the first round of hearings at the capitol. 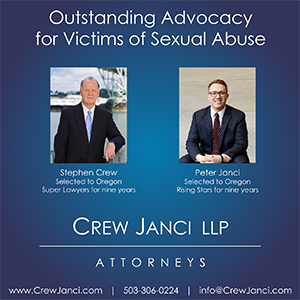