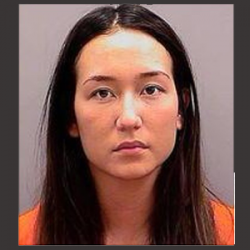 A female basketball coach from Gooding, Idaho, was arrested Friday for indulging in sexual activity with a minor student after the police received a tip regarding the same.

Ann Kuroki, 26, faces a charge of felony sexual abuse of a minor aged 16 to 17 years, it was reported. She is currently being held without bail at the Gooding County Jail.

Kuroki was hired by the Gooding High School, Idaho, in October and worked there as a coach for the boys’ basketball team.

According to her LinkedIn and Facebook profiles, she graduated from Southern Virginia University in 2015 with a degree in general studies and humanities. While she was studying in the varsity, she played for the women’s basketball team. Her LinkedIn profile also stated she was the captain of her varsity’s basketball team in her senior year. Before joining Southern Virginia University, she spent two years at Bellevue University studying behavioral sciences and also earned an associate’s degree in psychology in 2012 at Mid-Plains Community College, Nebraska.

Prior to working with Gooding High School, she worked as a nanny in Las Vegas, according to her Facebook profile.

Speaking of Kuroki’s current employment status, Gooding Police Chief Dave Fisher said she was suspended from her job Thursday. He added the school would also be conducting an internal investigation into the incident.

An agenda for the school’s upcoming board meeting scheduled for Tuesday mentions a point about Kuroki’s termination.

Fisher also said police began investigating Kuroki after they received a tip she was allegedly involved in an illicit relationship with a minor student, the Daily Mail Online reported.

Kuroki is scheduled to be arraigned Monday. If convicted, she could face up to 25 years in jail depending on the nature of charges pressed against her.

In a similar incident in December, a 32-year-old teacher from Beaumont, California, was arrested for having sex with an underage student. The incident came to light after the teen posted a video on Snapchat describing his agony over his sexual relationship with his teacher. In the video, the victim admitted to having sex with his teacher at least five times over a period of several months and how she performed oral sex on him.

In another case in December 2017, a 23-year-old teacher from Maysville Local School in Zanesville, Ohio, was arrested for sexual battery involving two of her students aged between 14 to 16 years. However, she pleaded not guilty to the charges against her.