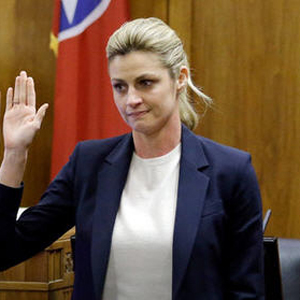 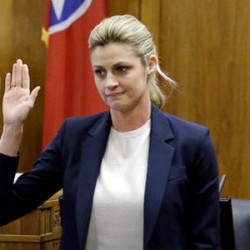 A jury awarded the Fox sportscaster Erin Andrews $55 million in her lawsuit against a Nashville hotel and a stalker after she was secretly videotaped naked several times in 2008, according to reports.

Ms. Andrews had sued for $75 million, accusing the companies that manage the Nashville Marriott, West End Hotel Partners and Windsor Capital Group, of negligence leading to emotional distress and invasion of privacy, according to court documents. Ms. Andrews had also sued the Illinois man who filmed her, Michael David Barrett.

The jurors found Mr. Barrett, who pleaded guilty and served more than two years in prison for traveling across state lines to videotape Ms. Andrews multiple times, responsible for 51 percent of the blame, according to The Associated Press. The hotel companies were found to be responsible for about $27 million.

During her testimony last week, Ms. Andrews, who worked for ESPN at the time the secret videos were taken, said that she had been constantly reliving the ordeal and that she felt “so ashamed” after discovering that nude images of her were available on the Internet.

“This happens every day of my life,” she said. “Either I get a tweet, or somebody makes a comment in the paper, or somebody sends me a still of the video to my Twitter, or somebody screams it at me in the stands. And I’m right back to this.”

In a statement posted to Twitter after the verdict on Monday, Ms. Andrews thanked the court and the jury.

“The support I’ve received from the people of Nashville has been overwhelming,” she said.

Mr. Barrett, who has admitted to filming other women without their knowledge, said in a previously taped deposition that he used a hacksaw to alter the peepholes of Ms. Andrews’s hotel rooms in Nashville and Columbus, Ohio. The footage was put online in 2009 and shared widely.

Ms. Andrews contended that the hotel should have told her that a man had inquired if she was staying at the hotel.

“This could’ve been stopped,” she testified. “The Nashville Marriott could’ve just called me and said, ‘We’re putting this man that requested to be next to you, is this O.K.?’ And I would’ve called the cops and we would’ve gotten him. I’m so angry. I’m so mad.”

She said ESPN had required her to do an interview about the case before she could return to work as a college football sideline reporter; she chose to tell her story to Oprah Winfrey, who is a survivor of sexual abuse.

Other female sports reporters told Sports Illustrated that Ms. Andrews’s experience had prompted them to take extra precautions when traveling.

More information about Erin Andrews’ case can be found here:

If you have information about hidden cameras or secret filming in your area, please contact your local police department.

Also, if you would like advice from an attorney about the rights and options for victims of sexual abuse or exploitation, please contact Crew Janci LLP today for a free, confidential consultation at 1-888-407-0224 or by using our private online form.  We will treat you with discretion and respect.