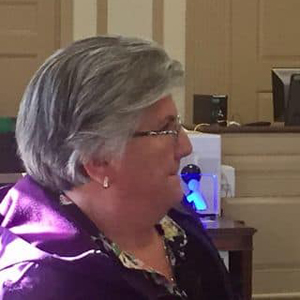 MORRISTOWN – Retired Mount Olive Middle School physical education teacher Maria Patamia, who admitted in December that she touched the breasts of a 14-year-old girl in 1993, was sentenced Friday to probation, community service and Megan’s Law registration by a judge who said he was troubled by how Patamia has minimized her conduct.

Patamia, who retired after 32 years as an educator and now operates Fanucci’s Cafe in Netcong with her husband, was originally charged with more serious counts of sexual assault on the victim, including penetration, but she pleaded guilty in December to one fourth-degree count of criminal sexual contact. Patamia admitted only that she touched the breast of the victim, who was 14 at the time, while hugging her and did so for her own sexual gratification. In 1993, Patamia, now 58, was about 35.

Patamia  but did not admit to any acts of penetration on the girl. Under current state law, there is no statute of limitations on acts of sexual penetration on a child.

However, Superior Court Judge Stephen Taylor, who has access to reports and statements on the case, said the victim’s account was “significantly different” than the one provided by Patamia. The judge also alluded publicly for the first time to the victim being sexually abused by both Patamia and a second adult female – Patamia’s roommate in 1993 – but the second adult now is deceased.

The victim flew in for the sentencing from her  home in Minnesota and, accompanied by her children and a victim advocate from the Morris County Prosecutor’s Office, was in court and gave the judge a long statement about the feelings that finally made her come forward.

The victim said she has never forgotten how Patamia expressed “love” to her through sexual abuse but that motherhood made her decide to speak out after years of trying to forget and worrying about getting Patamia in trouble.

“Maria was my teacher. She was my coach. She was my friend. People will tell you she was a teacher who touched lives, changed outcomes … that she was a passionate educator. I wish that I could share those same sentiments, that I could express some gratitude for the way she influenced my life. I really wish I could. But I cannot.

“She used her role and position of authority to shape me much differently. She took advantage of her place and groomed me. I became her prey. My teacher, my coach, my friend, sexually abused me for nearly a year,” the victim said, as her voice shook and she wiped tears from her eyes.

“To be honest, it was becoming a mother that helped me get here today,” the victim said. “To hold you (Patamia) accountable for what you did. To understand what you took from me as a child and how that has continued to take from what I am able to give to my own children.”

Assistant Prosecutor Justin Tellone told the judge that Patamia used her power as a teacher to get sexual gratification from the young teen and he noted that Patamia has “tried to soften” her offense. Defense lawyer Marcy McMann told the judge that Patamia was “confused” about life at the time of her encounter with the teen but has redeemed herself, taking care of her elderly parents, her family and being active in Netcong school activities and other civic events.

“Maria is a person who has come a long way in her life … and has resolved the confusion she had at that time,” McMann told the judge.

Patamia, who was supported in court by 15 friends and relatives, told the judge she was sorry for her “poor judgment” and the pain she caused the victim. But she said she has redeemed herself and asked for leniency.

Tellone, the assistant prosecutor, had recommended that Patamia be sentenced to probation, Megan’s Law registration and 180 days in the Morris County Jail. But the judge said he didn’t believe a jail sentence should be imposed after so long, but that there are other ways to impose a punitive aspect to the sentence.

Taylor sentenced Patamia to two years’ probation and 180 hours of community service in lieu of incarceration. She must register with police in Netcong as a convicted sex offender under Megan’s Law and pay a $2,500 fine.

The judge said he was troubled by the case and his perception that Patamia has not fully accepted responsibility for her crimes. Taylor noted that defendants frequently give “bare bones” factual accounts of the crimes to which they are pleading – and are permitted to by law as long as the account satisfies the elements of the crime. In Patamia’s case, she acknowledged only that she touched the teen’s breasts for her own sexual gratification.

“The defendant – as the victim made clear – was grooming her,” Taylor said. “I don’t think the defendant has fully accepted responsibility.”

During her plea in December, Patamia agreed that in 1993 she was a teacher at the Mount Olive Middle School and knew a female student who was 14. In July 1993 – after school was out for the summer – the victim worked for Patamia at a flea market in Pennsylvania and for convenience, stayed overnight at Patamia’s home in Netcong.

Patamia acknowledged during her plea that she hugged the girl and in doing so, touched the victim’s breasts for her own sexual gratification.

The victim also had told the judge that she lived in fear for years and suffered panic attacks. She ultimately reported the sex crimes to authorities in Morris County in 2015 and, after an investigation, Patamia was charged and later indicted on sexual assault charges.

“When I could have told someone I didn’t,” she said. “I didn’t want to. I was too afraid. Afraid for what would happen to her if I did. Afraid she would be mad. That she would get in trouble.”

The victim said that many people consider Patamia a kind, trustworthy person, and Tellone told the judge that Patamia wears those traits as a persona.

“Some have written letters and some may stand today and give statements of support. They will speak of a person who is kind, caring, even trustworthy. Your honor, I agree. Maria was all of these things to me. She used these qualities as bait,” the victim said.