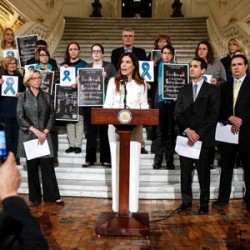 In the wake of a grand jury report on abuse in the Altoona-Johnstown Diocese released earlier this month, Pennysylvania State Representatives, adult victims of child sexual abuse and advocates gathered together Monday at the state Capitol to push for reforms to the statute of limitations for child sexual abuse.

The group is urging lawmakers to pass two bills, one that would eliminate the statute of limitations for criminal and civil cases of child sex abuse and another proposal that would create a two-year window for past victims to file civil lawsuits.

Advocates point to social science literature which shows that victims are often unable to speak about the abuse until well into adulthood.

The Catholic Church and insurance industry lobby are opposing these bills.

Led by Rep. Mark Rozzi, D-Berks, the rally in the Capitol Rotunda was held to demonstrate public support of efforts to revise child sex abuse statute of limitations laws to allow adult victims to seek justice.

“It is time to have victims voices heard. It is time to stand up for victims,” said Rep. Mark Rozzi (D-Berks), who himself was a victim of child sexual abuse. “We didn’t get elected to protect pedophiles, perpetrators and institutions. I don’t remember an institution going into the ballot box and voting for me.”

According to the grand jury investigation, priests in the Altoona-Johnstown Diocese sexually abused hundreds of children over about 40 years. The report alleges that religious leaders worked to cover up the abuse.  However, due to statute of limitations laws, these cases cannot currently be prosecuted.

“First it was Boston, then Philadelphia and Los Angeles, and the pattern repeats itself in Altoona-Johnstown,” Rozzi said. “The only way this ends is if we make it loud and clear to child rapists and those who harbor them, that they can no longer hide.”

Attorney General Kathleen Kane, whose office conducted the grand jury investigation, said perpetrators responsible for child sexual abuse deserve to be held accountable for their crimes, regardless of when they took place.

Kane said 19 states in the U.S. have already eradicated statutes of limitations on child sexual abuse. Pennsylvania is falling behind on these laws, she said.

“Sexually abusing a child essentially kills all of the childhood foundations necessary to grow into a happy adult with trust,” she said. “This is a life sentence for the child.”

The grand jury submitted three recommendations in its report: Abolish the statute of limitations for sexual offenses against minors; open a window to allow child sexual abuse victims to have their civil actions heard; and require reporting of potentially  criminal conduct  to law enforcement authorities.

Following the recommendations, the bipartisan movement aims to present two bills to the House for a vote.

Rozzi said despite years of vying for statute of limitations reform, state legislators now have the outrage and momentum to bring these bills to the floor and pass them into law.

“Legislators have finally said ‘enough is enough,’ ” he said.

More information on the sexual abuse victims rally for change to Pennsylvania law can be found here:

It is important to note that statutes of limitations vary state to state.  Some states – like Oregon – already allow many victims of child sexual abuse to seek justice well into adulthood.

If you or a loved one was a victim of child sexual abuse and you would like to speak with someone about your legal options please contact Crew Janci LLP today for a free, confidential consultation at 1-888-407-0224 or by using our private online form.  We will treat you with discretion and respect.