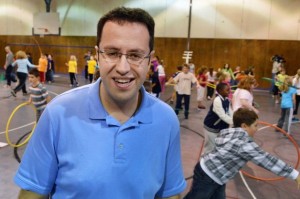 News is breaking about Subway  chain’s spokesman — Jared Fogle — pleading guilty to charges of child pornography.  But Fogle’s sexual exploitation of children reportedly goes much further than that.

Fogle traveled to New York City at least twice between 2010 and 2013 seeking sex with minors, and paid for sex acts twice with a girl he knew to be 17 years old. He told the girl he would “make it worth her while” if she could find him another minor to have sex with, “the younger the girl, the better,” according to the indictment.

Prosecutors said he repeatedly asked prostitutes and others to find him 14- and 15-year-olds for sex.

So, Jared Fogle is charged with producing and exchanging child pornography (using secret cameras) in connection with his nonprofit organization, The Jared Foundation, which purportedly encouraged healthy eating habits in children.  Fogle is also charged with crossing state lines to commit child sexual abuse.  And Fogle is reported to have solicited others to find him children to have sex with — also known as sex trafficking.

You can read the government documents about the charges against Fogle here.

Fogle’s plea deal will reportedly require that he serve at least five years (perhaps as many as 12 years) in prison.  Fogle, 37, will also pay $1.4 million to 14 victims in restitution for counseling, support, treatment, or other assistance related to their victimization.  The agreement reportedly requires that Fogle follow a pornography ban and participate in sexual disorders treatment, have no unsupervised visits with minors, and submit to computer monitoring.

This will be a significant change for Fogle, who enjoyed celebrity status as the lead spokesman for Subway for nearly 15 years:

He was asked to serve as grand marshal in NASCAR races, and he helped ferry the Olympic torch through Indiana ahead of the Salt Lake City Games.  He flipped the coin before the 2003 Fiesta Bowl and began traveling the world visiting troops. In 2006, the same year he started the Jared Foundation, he penned a memoir, “Jared, the Subway Guy: Winning Through Losing: 13 Lessons for Turning Your Life Around.”

As for Subway, they have suspended their “Jared ad campaign” and “immediately began erasing Mr. Fogle’s image from its website and stores.”

If you or someone you care about has been a victim of sexual abuse or exploitation, let us help.  Call Crew Janci LLP today at 1-888-407-0224 for a free, confidential consultation.  Or contact us using our secure online form.