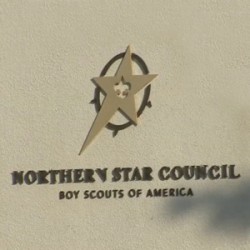 The Boy Scouts’ “usher program” at Williams Arena seemed like every boy’s dream: an opportunity for community service that came with a front-row view of Gopher basketball and hockey games.  But, in a new lawsuit filed today in Ramsay County, one local man says what should have been a dream was actually a living nightmare – with a Scout Leader repeatedly raping him in a locked room in back of the arena.

Today’s lawsuit names the Boy Scouts of America and its local chapter (the Northern Star Council) as defendants in an action based on the child sexual abuse suffered by a Minneapolis man referred to in court papers as  “John Doe 159.”  (The University of Minnesota is not named as a party to the lawsuit.)

John Doe 159 is available for interview on the condition of anonymity.

According to the Complaint, in the early 1980s John Doe 159 was a member of Boy Scout Troop 58, sponsored by Battle Creek Elementary in Minneapolis.  John Doe 159 was an accomplished Boy Scout, selected for the Order of the Arrow (the national honor society of the Boy Scouts of America) and reaching the rank of “Life Scout.”  The boy’s step-father was also active in volunteering with the troop, according to the victim’s attorneys.

During his time in scouting, Doe 159 and other members of Troop 58 volunteered at the Williams Arena (on the Twin Cities campus of University of Minnesota campus).  According to the lawsuit, the scouts served as “ushers” during Gopher basketball games.

“The usher program at Williams Arena was an official boy scout activity.  The usher events were led by Scout Leaders in uniform.  Only boy scouts wearing scout uniforms could serve as ushers during these events.  At the time, it appeared to be a successful program; but, this case reminds us, appearances can be very deceiving” said Steve Crew of Crew Janci LLP, part of the legal team for John Doe.

According to the lawsuit, the Scout Leader in charge of the Boy Scouts’ usher program at the arena used his position of authority in scouting to lure boy scouts to a back room where he would rape and molest them.  One of those victims, according to the lawsuit, was John Doe 159 – who was abused by the Scout Leader on multiple occasions at the Arena.

“We intend to prove that this Scout Leader used this scout activity to isolate a 13 year old boy and rape him a multiple times in a locked room in the back of the arena.  This was devastating for the victim and shocking for his parents — the only ones who weren’t surprised were the Boy Scouts of America.  We intend to prove that the Boy Scouts knew that this sort of thing had happened before, knew that it could happen again, and BSA did nothing meaningful to prevent it,” said Minneapolis Attorney Patrick Noaker, one of John Doe 159’s attorneys.

Today’s lawsuit alleges that the Boy Scouts are responsible for the sexual abuse John Doe 159 suffered because the organizations knew for decades prior that scout leaders were sexually abusing boys.  The lawsuit alleges that: “Between 1935 and 1971, Defendant BSA identified thousands of additional Scout Leaders who were believed to have sexually abused boys in Defendant BSA’s scouting program.”

The Boy Scouts kept records about Scout Leaders accused of child sexual abuse in secret internal files call the “Ineligible Volunteer files.”  “While the Boy Scouts have been forced to release some of these files, they still have not released at least 49 secret files involving Scout Leaders in Minnesota who were accused of child sexual abuse after the year 2000.  These are suspected predators who could still be in the community and could still pose a risk to kids in our neighborhoods.  And the Boy Scouts are still keeping this information a secret from parents,” said Peter Janci of Crew Janci LLP, one of John Doe 159’s attorneys. (Approximately 1,200 of the Boy Scouts secret “Perversion Files” from the 1960s thru the 1980s can be found on the Crew Janci LLP website.)

“Based on our initial investigation, we believe that there were likely other scouts who were sexually abused during Scouting events at the Williams Arena,” said attorney Lee James, one of Doe 159’s lawyers.  “We hope that any victims of child sexual abuse in Scouting will get the help and justice that they need and deserve under the Minnesota Child Victim Act.”

Minnesota’s recently-enacted Child Victims Act allows many victims of child abuse a window to bring claims without restriction from a statute of limitations, even if the abuse occurred decades ago. The Minnesota Child Victim Act passed into law with unanimous support in the Senate and only seven detractors in the House, based largely on evidence that victims often keep child abuse a secret long into adulthood and often have difficulty recognizing that mental health, addiction, or relationship problems experienced as an adult stem from childhood sexual abuse. The window established by the Minnesota Child Victim Act is set to close in May of 2016.

In filing this lawsuit, John Doe 159 joins nearly a dozen similar victims who have recently filed lawsuits in Minnesota against the Boy Scouts of America and its local chapters. Many of these followed a public announcement in June by Ramsey County Commissioner Jim McDonough disclosing his own sexual abuse as a boy scout.

If you have any information about this Scout Leader, or if any Scout employee or volunteer engaged in sexually abusive conduct with you, please contact Crew Janci LLP today for a free, confidential consultation at 1-888-407-0224 or by using our private online form.  We will treat you with discretion and respect.