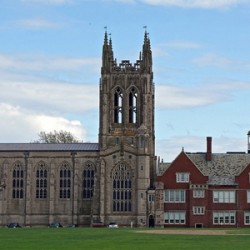 More than two dozen students have come forward alleging that they were raped or molested while attending St. George’s School in Middletown, New Hampshire during the 1970s and 1980s. In a press conference on Tuesday, three St. George’s alumnae, Anne Scott (’80), Katie Wales Lovkay (’80) and Joan Reynolds (’79) – who were sexually victimized in the 1970s by former athletic director Al Gibbs – alleged that the prestigious Episcopalian prep school engaged in the systematic concealment and denial of rampant sexual abuse by faculty, chaplains and peers.

In December of 2015, St. George’s headmaster, Eric Peterson, and Board of Trustees Chair Leslie Heaney released a report following a 10-month investigation into alleged sexual abuse by several staff and students at the school in the 1970s and ’80s. The school’s report identified 26 victims of abuse by six school employees during those years. Four of the six former school employees were fired, the school’s report said. One staff member was fired for giving alcohol to students, but the sex abuse allegation did not surface until the school’s recent probe.

The report underscored the School’s “regret, sorrow and shame that students in our care were hurt,” and stated that St. George’s had forwarded information about other alleged perpetrators, including three students, to state police. It also conceded that it “failed on several occasions” to report the attacks. However, the victims questioned the validity of the December report, calling for an independent probe on the basis that the investigator, Will Hannum, had a conflict of interest because he is the law partner at the firm that acts as St. George’s legal counsel.   They allege that the abuse at the school – which is run by the Episcopalian Church, itself part of the worldwide Anglican Communion – was much wider than the report indicated, and continued into 2004.

Although Rhode Island State Police launched an investigation into the sexual abuse in November 2015, the school’s recent decision to forward the information to police does not negate the fact that, for years, school administrators did not report known or suspected abuse to Rhode Island child protection authorities, as required by law, each time a complaint was brought before them. “Most victims, and some other witnesses, indicated that they believe that the School should have inquired into and taken action with respect to Gibbs in the years prior to terminating his employment,” the report said. “Regrettably, the School did not report misconduct by Gibbs to any state agency at the time of his termination in 1980.”

On Tuesday, the victims and their lawyers released a 36-page response to the December report, accusing Peterson and St. George’s of trying to shield the school from scandal. One of the victims said the rebuttal document “contains all of the information we have been able to gather” since the story first broke in The Boston Globe in mid-December. The rebuttal contains graphic descriptions of two student-on-student rapes; and details of assaults by several staff. It names names, and tells of victims’ anguish — including one former student who burned himself repeatedly with cigarettes.

The victims alleged that the current headmaster at St. George’s School and past administrations used “intimidating tactics aimed at silencing victims and protecting the school from scandal.” The victims explained that, as heinous as the abuse was, “in the end, it is the behavior of Mr. Peterson and the school in 2015 which is scandalous.”

The scale of the predation at St George’s is approaching that of the case at Horace Mann School, an elite New York City prep school, which burst open three years ago and involved 63 former students. The case also echoes the claims made by thirteen of our clients, who were sexually abused by a prolific pedophile, Jack Moyer, while attending the American School in Japan in the 1970s and 1980s.

Since the Boston Globe first reported on the case in mid-December, more than 42 alleged victims have come forward with allegations of sexual abuse. The case is unique not only for its sheer magnitude, but also because New Hampshire does have a criminal statute of limitations for rape. As a result, at least four of the perpetrators identified by the victims and their attorneys may face prosecution. And, now that the School has finally agreed to hire a third-party investigator to oversee a “comprehensive investigation of sexual abuse” at the school, many more may yet come to light.


If you or someone you know has been a victim of sexual abuse, please call us today at 1-888-407-0224 or use our confidential online form. We will treat you with discretion and respect.

You are not alone. We are here to help.