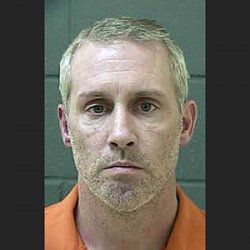 Article from The Dalles Chronicle.

Robert Weems, 42, a former substitute teacher in School District 21 and a former track and wrestling coach at the middle school, was arrested Friday and is accused of sexually assaulting a student.

The second-degree sex abuse counts, class C felonies, are alleged to have occurred between Nov. 1 and 21, 2017.

Of the alleged sex abuse, Wasco County District Attorney Eric Nisley said, “It’s not forcible, but its nonconsensual” because the victim was under 18 years old and cannot legally consent.

Weems had a video court appearance Monday, where he was arraigned and held on security, meaning he has to post bail to get out of jail. He remained jailed Tuesday morning.

The official misconduct charge, a Class A misdemeanor, alleges that, as a public school employee, Weems had sexual contact with the student between March 1 and July 1, 2017, according to the indictment.

The third-degree sex abuse charge, a Class A misdemeanor, alleges Weems had sexual contact with the student on or between March 1 and July 1, 2017.

Superintendent Candy Armstrong said Weems was a substitute teacher in the high school in the 2015-16 academic year. And in the 2016-17 year he worked at the high school, middle school, and Dry Hollow, Colonel Wright and Chenowith elementaries.

“The safety and wellbeing of our students is always our first priority,” Armstrong said. “We appreciate the partnership we have with local law enforcement and know that they handle investigations with care and professionalism.”

Weems was also the head wrestling coach at the middle school in 2016 and a track coach, Nisley said.

According to a press release from the Morrow County School District, Weems was hired as a sixth-grade teacher at Windy River Elementary School in Boardman on July 1, 2017. Weems was placed on paid administrative leave Thursday morning, as soon as the school was made aware of “a potential situation” with Weems in The Dalles.

Nisley said, “We have concerns he may have a criminal history out of state for domestic violence. We have not yet confirmed that.

“As stated in court, he shows up on his criminal history, but a date of birth for one of those is off; the other information is the same.

“He has several accusations of domestic violence in a couple of different states and we want to make sure, we want to confirm that before we state that unequivocally, which usually means contacting the other jurisdictions.”

Armstrong said the “Oregon Teachers Standards and Practices [board] required a criminal background check including fingerprinting prior to issuing a teaching license. That background check is both state and federal.”

Nisley estimated that in his 20-plus years as district attorney, he’s prosecuted perhaps 10-15 teachers for sexual crimes with students. “Not very common, really.”

He said, “The schools do a good job of not only monitoring and screening, doing background checks, but nobody’s ever perfect. If somebody has a perfect system for screening and backgrounding people, I would like to know what it was.”

Did you know Art Leo, teacher at Catlin Gabel, Portland, OR?