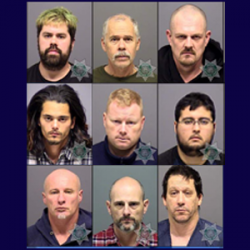 CLACKAMAS COUNTY, OR – Nine men who showed up at a Clackamas County location looking to have sexual contact with minors were arrested as part of a sting operation called “Operation Kidsafe,” according to deputies.

The operation was conducted by the Inter-agency Child Exploitation Prevention Team from Friday to Sunday.

Deputies said the suspects were interacting with law enforcement professionals posing as children online from ages 14 and younger.

“Personally to me, it’s just shocking to see individuals who are really making a huge effort to try and have sex with children at such a young age,” said Clackamas County Sheriff Craig Roberts.

A meeting place in Clackamas County was established with the suspects, who were arrested at the scene.

“They showed up with the full intention of meeting kids 14 years and much younger,” said Roberts.

The suspects were identified Monday as:

Detectives are following up on investigative leads in connection with Operation Kidsafe and said they hope to make more arrests in the near future.

On Monday, Sheriff Roberts had a message for child predators.

“I want you to know we’re out there and we’re paying attention and what we see online we’re going to make sure we do everything we can to hold you accountable, trying to solicit young kids in our community,” he said.