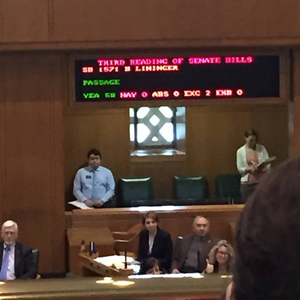 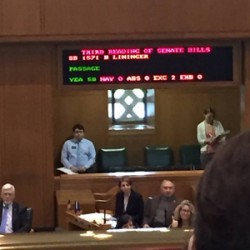 Today marks two huge wins for survivors of sexual violence here in Oregon: the passage of SB 1600, which extends the criminal statute of limitations for sex crimes, and the unanimous passage of SB 1571 – “Melissa’s Law” – a bill mandating testing of sexual assault forensic evidence kits.

“Melissa’s Law” – named after 14-year old Melissa Bittler, who was raped and murdered in 2001 – represents a huge win for survivors of sexual assault and sexual violence.  Among other things, the bill mandates testing of all rape kits (except “Jane Doe” kits), and requires law enforcement to retain kits for a minimum of 60 years before destroying them.  The bill has several extremely important provisions allowing survivors to contact law enforcement to find out more information about the status of their kit, including whether a DNA profile was obtained and uploaded to CODIS, and if there was a hit in the DNA database linking the offender to another crime.

The law requires police officers to pick up a kit from a hospital within seven days of receiving notice that a kit is ready, and must submit the kit to the Oregon Department of State Police within fourteen days thereafter.  “Melissa’s Law” also contains provisions to ensure accountability and attention to this issue moving forward.  For example, the law requires the Department of State Police to submit a written report to the interim committees of the Legislative Assembly every year detailing the progress made on the backlog of untested kits, as well as the number of new kits received, the number of kits tested during the previous year, and the number of remaining untested kits in the Department’s possession.

In addition, the law establishes a task force comprised of sixteen members, including legislators from both the house and the senate, as well as individuals appointed by the Governor to represent the interests of law enforcement, survivors, advocates, prosecutors, criminal defense attorneys, and sexual assault nurse examiners.   The task force’s job will be multi-fold, and will address extremely important areas for additional follow up such as improvements for victim access to evidence other than sexual assault forensic evidence kits, law enforcement training on responding to and investigating sexual assaults, allowing testing of “Jane Doe” kits (if the “Jane Doe” victim would like her kit to be tested while remaining anonymous) and identifying additional funding to help increase efficiency and victim notification.

In addition, the Oregon State Legislature passed SB 1600, which creates an exception to the now-twelve-year statute of limitation for sex crimes in Oregon where new, corroborating evidence later arises.  SB 1600 follows hot on the heels of last year’s extension to the criminal SOL, which doubled the SOL from six years to twelve years.  SB 1600 – soon to be signed into law – allows prosecution of first degree sex crimes any time after the commission of the crime if the prosecuting attorney obtains corroborating evidence of a crime.

Now, prosecutors in Oregon will be able to effectively charge perpetrators like Bill Cosby, who flew under the radar for so long before additional victims began speaking out and sharing their stories.  This is an incredibly significant step in the right direction to ensuring sexual assault survivors’ access to justice, considering that so many victims do not report immediately due to self-blame, shame, guilt, and fear.

We are proud to be part of this important chapter in our state’s history, and are so very grateful for all those who toiled on behalf of survivors in order to make these tremendous changes!

Also, if you would like advice from an attorney about the rights and options for victims of sexual abuse, please contact Crew Janci LLP today for a free, confidential consultation at 1-888-407-0224 or by using our private online form.  We will treat you with discretion and respect.