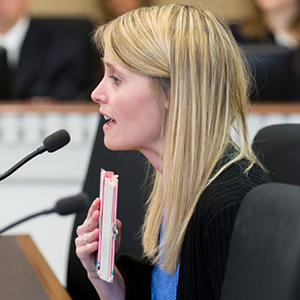 Will this be the year state gets law to help kids report sex abuse? 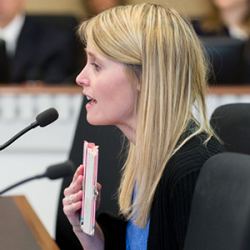 OLYMPIA, Wash. — A survivor of childhood sexual abuse hopes the third time is the charm in trying to get her bill through the state Legislature.

The proposed law is named for Erin Merryn who testified for her bill last session. “Good morning, I flew here yesterday from Chicago with my 9-month-old daughter because that’s how passionate I am about protecting kids from abuse.”

For three years Merryn has been testifying about what she calls the “‘silent epidemic of child abuse.” Merryn says children learn about fire drills, earthquake drills and stranger danger. But she says they need to know about how to stay safe when nine out of 10 abuse cases involve someone the child knows.

“As a young child 6 to 8 I was abused by my best friend’s uncle who lived with her. This man repeatedly abused me and told me ‘I know where you live I’ll come get you.’ So I stayed silent,” Merryn said.

KOMO News talked with her at the airport because she travels the country to get states to include sex abuse awareness in their curricula. Education committee chair Rep. Sharon Tomiko Santos, D-Seattle, said Washington state already does that. The sponsors of Erin’s Law said it’ll bolster that especially in light of the “Me Too” effort in the national spotlight.

The bill passed the House education committee with a unanimous vote on Tuesday.

Said Rep. Paul Harris, R-Vancouver, ” I think it is so important that our young women and some of our young men who are abused understand the ability to come forward and recognize what is happening.”

Despite support for the concept, the $1 million price tag had caused lawmakers to balk in past years along with the idea Erin’s law would duplicate some state curriculum. Sponsors say that has all been ironed out.

“So this is a big win for our state,” said Rep. Gina McCabe, R-Goldendale, sponsor of HB 1539. “It’s a great step forward to protect our children. So I’m very happy right now.””

Erin speaking from her home in Chicago said she is elated that the bill got by this major roadblock realizing it still has a long way to go. But at least it has gotten further than it ever has before.

House and Senate leaders from both parties say they like the concept of Erin’s Law, but they’ll have to see the final form of the bill before assuring its passage.