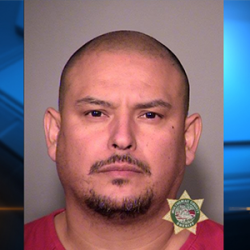 In the 2015, the Portland Police Bureau completed an audit regarding the number of Sexual Assault Forensic Evidence (SAFE) kits stored in its property room.  As a result of the audit, PPB received a federal grant to help with the cost of testing and investigation.

In April 2016, the first shipment of untested SAFE kits was sent to a private laboratory in Salt Lake City, Utah.

Jose Oscar Rosales was indicted by a Multnomah County grand jury in May 2017 and charged with two counts of second-degree sexual abuse. At the time of the indictment, Rosales was serving a prison sentence in Wisconsin.

In December 2017, Rosales was brought back to Oregon to be arraigned on the allegations.

Rosales met the alleged victim, then a 16-year-old girl, on an airplane, according to prosecutors.

The abuse did not occur on the aircraft. Instead, according to prosecutors, Rosales contacted the girl and abused her when he came back Portland on a trip in 2006.

Rosales was 30 when the abuse occurred. Originally, the case was reported in Clark County, Washington. Eventually, the PPB Sex Crimes Unit started an investigation into the allegations once it was determined that PPB had jurisdiction.

The victim’s SAFE kit was submitted to the private lab in 2015 as part of the SAKI program. The results came back in October 2016 with a positive match with Rosales’ DNA.

On Monday, Jose Oscar Rosales was given a 210-day incarceration sentence. He received credit for time already served in Multnomah County, which has been about 8.5 months.

Rosales will be transferred back to Wisconsin in the near future to finish out his prison sentence.

Upon release, he will have to register as a sex offender and will be on 5 years of post-prison supervision.

Rosales pled no contest to the 2 counts of second-degree sexual abuse. A no contest plea means that he did not admit any guilt but stipulated that there was enough evidence to convict him had the case gone to trial.