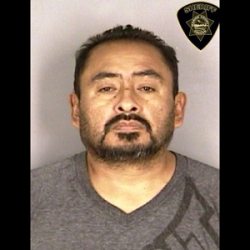 A Woodburn man was sentenced to 50 years in prison Thursday after pleading guilty to sodomizing a girl under the age of 12 over the course of three years.

Hermelindo Nava-Cortes, 48, was arrested in September on 12 counts of first-degree rape and first-degree sodomy.

According to a secret indictment filed in Marion County, Nava-Cortes sexual assaulted the girl at least a dozen times from October 2014 to May 2017.

He pleaded guilty to four counts of first-degree sodomy and was sentenced 25 years in prison for each count. Two of his sentences will be served consecutively, giving him a total prison sentence of 50 years. He will not be eligible for a reduced sentence or work release.

His sentence also includes 100 years of post-prison supervision and he must register as a sex offender upon his release.

The eight remaining charges were dismissed.

First-degree sodomy is a Measure 11 offense requiring a mandatory minimum sentence of eight years and four months in prison.

According to court documents, prosecutors sought a longer sentence due to the victim’s young age, multiple incidents and Nava-Cortes using force during the assaults.