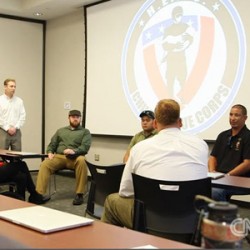 During that year-long internship, HERO Corps trainees will sift through thousands of disturbing images of adults sexually assaulting children.

“You see groups of children being abused at levels the average American cannot fathom. If you imagine an infant getting gagged and bound tortured, it’s not a rare occurrence to come across,” says J. Christian, CEO of the National Association to Protect Children (Protect).

The National Center for Missing and Exploited Children says its Victim Identification Program, which aids law enforcement in efforts to locate and rescue child victims, has reviewed more than 158 million images and videos, since 1998.

In 2008, an ICAC Task Force network identified over 300,000 unique computers engaged in trafficking child pornography. A study by the University of New Hampshire found that 55 percent of those who possess or trade child pornography, are hands-on offenders.

Now in its third year, HERO Corps hopes to place its 100th veteran this year. Once embedded in a law enforcement agency, just one HERO can stop or prevent the exploitation of as many as 50 children per year, by providing law enforcement with the digital evidence they need to identify and locate endangered children.

Learn more about the HERO Corp program and the veterans who get involved to help save at-risk kids here: