Lawyers to Seek All Internal Reports on Abuse from Around Country

Ontario, Oregon– Attorneys for a young disabled girl from Eastern Oregon filed a lawsuit today seeking $5 million from the national Boys and Girls Clubs of America organization and one of its local clubs.  Filed in Malheur County Circuit Court, the lawsuit arises out of the 2011 rape of a seven-year-old disabled girl that took place at a Boys & Girls Club in Eastern Oregon.

According to court documents, at the time of attack the victim– referred to by the pseudonym “Amy Doe” –was only seven years old and “suffering from significant mental and physical disabilities or impairments.”  The perpetrator of the attack was a “teenage male summer program participant,” per the lawsuit.  (The perpetrator is referred to in the complaint only as “C.B.” because he was a minor.)  The lawsuit alleges that the attack took place during program hours in a single-user bathroom inside the Boy and Girls Club of the Western Treasure Valley in Ontario, Oregon.

The victim in today’s lawsuit is represented by the Portland law firm of Crew Janci LLP, which is known for pursuing child sexual abuse cases around the country in cases against large organizations, including the Boy Scouts of America, the Mormon Church (“Church of Jesus Christ of Latter-day Saints”), and Catholic Church.  Attorneys with Crew Janci LLP have previously represented a number of plaintiffs in other sexual abuse cases against the Boys and Girls Clubs in Oregon.

The lawsuit includes a claim for fraud against the National Boys and Girls Club organization, which contends that the national organization misrepresented the nature of its relationship with its clubs in local communities, as well as the safety of its programs.

“One of the most concerning dynamics in these cases is that the national Boys and Girls Club is takes the position that they are not responsible for what happens at their local clubs. And that’s just wrong. The national Boys and Girls Club is happy to hold out these local clubs in thousands of communities around that country as ‘their clubs’ – especially when they are fund-raising.  But now, when a child gets hurt at a local club, the national organization is effectively telling her parents: that’s not our problem,” said Peter Janci, one of the attorneys for the Plaintiff in today’s lawsuit. 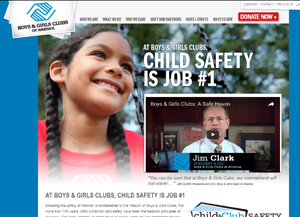 “This seven year old girl was already disabled and vulnerable before the attack she suffered at the Boys and Girls Club.  The impact is profound.  It is going to take a lot of expensive treatment over many years to address the profound impact of what this little girl suffered at the Boys and Girls Club,” added Stephen Crew, one of the attorneys for the Plaintiff in today’s lawsuit.

Based in Atlanta, the national Boys and Girls Clubs of America “serve[s] nearly 4 million young people, through membership and community outreach, in over 4,200 Club facilities throughout the country and BGCA-affiliated Youth Centers on U.S. military installations worldwide,” according to its website.  More than 70% of the children involved with BGCA clubs are under 12 years old and most are racial or ethnic minorities.  According to Boys and Girls Clubs of America’s financial statements, the organization as of 2015 had assets of more than $450 million.

Supervision of bathroom facilities in youth programs is considered an important part of child abuse prevention, according to publications by the Center for Disease Control.  “This is really basic – you have to have a system in place that prevents an older teenage boy from taking a seven-year-old disabled girl into a bathroom and locking the door.  That’s just common sense, and we are confident a jury will see it that way,” said Crew.

This is the second lawsuit filed against the Boys and Girls Club in the State of Oregon: Lawsuit: Girl, 10, molested by Boys & Girls Club volunteer at NE Portland school

If you or someone you know has been the victim of sexual abuse in the Boys and Girls Club or a similar entity and you would like advice from an attorney about the rights and options for victims of child sexual abuse, please contact Crew Janci LLP today for a free, confidential consultation at 1-888-407-0224 or by using our private online form.  We will treat you with discretion and respect.