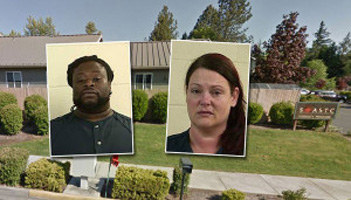 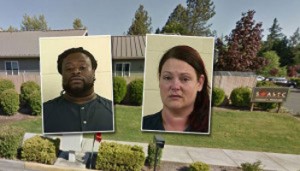 Two employees of the Kairos rehabilitation facility for at-risk children (formerly the Southern Oregon Adolescent Study and Treatment Center–SOASTC), in Grants Pass, Oregon, were arrested following allegations that they sexually abused and took sexual photographs of an underage girl. KDRV reports that the victim was a mental patient at the Kairos facility, seeking rehabilitative care.

Dewayne Sandel-Carnell, a Kairos employee since 2008, was charged with sex abuse in the second degree for sexual intercourse with a minor.  Sonia Leamons, charged with one count of display of sexually explicit conduct and one count of encouraging child sexual abuse in the second degree, was also employed at Kairos.  According to Lora Painter of KDRV, both worked closely with patients at the Kairos facility.

A former employee at Kairos, who identified herself as Barbara Seim on the KDRV web-site, indicated that she reported Carnell to Kairos about two years ago.  Seim says she spoke with the board about Carnell’s lack of professionalism, asserting they did nothing.  Seim also states on the web-site that Carnell was reported to and investigated by the state at that time, and suggests that Carnell’s prior conduct also involved another Kairos employee and another child victim.

On its website, the Kairos facility advertises among its values, “dignity and respect to those we serve, our partners, and each other” and promises to “Provide safe, stable and consistent environments.”  Kairos CEO Bob Lieberman spoke to KDRV, and claimed that Carnell had a spotless record as a lead caregiver at the facility.  Lieberman, a co-chair of Oregon’s Children’s System Advisory Committee, was appointed by former Governor Kitzhaber to serve in the healthcare transformation effort.  According to Lieberman, Carnell had a reputation for good work and positive relationships with patients and staff. Lieberman promised, however, to rebuild trust with the Grants Pass community.  “I would think that in some quarters that we’ve lost some trust. . . I would hope that we haven’t lost extensive trust . . . we have 37 and a half years of our work in the community and there’s a lot of young people in the community who call back and credit us with . . . having saved their lives,” said Lieberman.

Residential facilities have a duty to protect the children in their care.  At-risk children are especially vulnerable to sexual abuse and exploitation—and that vulnerability is only enhanced when children are in a fragile state of recovery from addiction, abuse, and trauma.  Communities and families that place their children in medical and rehabilitation facilities must be able to trust that the agencies in charge will always do everything they can to keep those children safe.

If you or someone you know has been sexually abused by an employee in a medical or rehabilitation facility, please call us confidentially at 888-407-0224 or email us at info@oandc.com.